Sorry for the image sizes... that's how big they come in at.

After today's jobs data, which I discussed in some detail by state here, interest rates are now deemed more likely than not to fall again to just 2.25pc, at close to a 7 in 10 chance.

One of the key reasons is explained by this chart, and that is mining construction, which has surged like billy-o for over a decade, is now about to get walloped, and this will involve the economy shedding tens of thousands of jobs (click chart):

When I speak to my old mining mates, most of them have been working directly or indirectly on resources construction projects of various shapes, sizes, and locations over the past half-decade.

But, generally, that construction phase of the mining boom is now drawing to a close, albeit unevenly, and mining workers aplenty will now be considering what to do with their completion bonuses and beginning to put feelers out about seeking gainful employment elsewhere.

When we tease out the construction activity work done data by state, it begins to become clear why over the short term it will likely be Queensland and Western Australia which will bear the brunt of the jobs losses.

That is, because it was those very two states which drove so much of the boom in mining construction work done the first instance (click chart):

The March 2014 quarter data for total new capex saw a significant decline in volume terms of 4.2% q/q, seasonally adjusted. So it does now seem as though at last the mining construction boom is at long last beginning to unwind.

But can other public and private sector building work done offset the forthcoming decline in engineering construction? To some extent, yeah...but on its own, nah...probably not (click chart):

To give some idea of the expected rate of contraction in capital expenditure, the "Estimate 2" for total capex (which includes capex for manufacturing, buildings & structures, & other industries etc.) for 2014-15 came in at just over $137,000 million, which was 12pc lower than the equivalent Estimate 2 for 2013-14.

In other words, over the next two years the decline in total capex is likely to be significant:

The next round of capital expenditure data on 28 August will therefore be vital in determining where rates go next, and especially the timing of any such movements, but to me it's looking increasingly likely to be a cut down to an official cash rate of 2.25%.

Although other parts of the economy should slowly begin to step up, for the reasons listed above the resources sector could shed anything from 75,000 to 100,000 jobs over the next couple of years, according to various bank forecasts.

Therefore, logically, if we want to see unemployment heading back down to 5%, the economy should probably be adding perhaps 25,000 jobs per month, and that's just not happening on average, regardless of the sporadic nature of monthly employment data.

Inflation? Look, probably not, and here's why.

The headline rate of inflation currently does sit close to the top of the 2% to 3% target band at 2.9%, that's true.

Nothing to panic about there, yet.

It's quite possible that the top of the annual inflation target band will be breached by the headline rate when the next CPI data is released on 23 July, especially since the soft headline print of 0.4% in the June 2013 quarter will drop off this time around.

But when you look at how the headline inflation seen to date has arisen, a slightly different picture emerges.

Non-tradables inflation, which might be viewed as something of a proxy for wages growth, has been falling of late.

And given the ongoing soggy labour market data, inflation on non-tradables seems likely to continue easing in the quarters ahead.

At just 2.6% y/y in the 12 months to March 2014, wages growth in Australia is the lowest on record across the relatively short history of the ABS series.

Moreover, with population growth continuing to surge at an annualised pace of 350,000+, the inherent slack in the labour market doesn't seem to be a dynamic which is likely to suddenly cause upwards pressure on wages (click chart):

So, probably not much to worry about there either from an inflation perspective.

To some extent what happens here will depend upon the fate of the dollar, and this may partly be deemed to be outside of Australia's control.

It is possible that tradables inflation will keep rising, but it's doubtful that will be a major concern for the central bank, and it's not necessarily that easy (or perhaps even desirable) a target for the Reserve Bank to control effectively at this time in any case.

In short, even if the dollar slides and this sends the headline rate of inflation jumping to above 3% annualised in the next quarter or two, it appears unlikely that this will be a major cause for concern for the RBA.

Another factor raised frequently, is that lower rates could see house prices rising too quickly.

However, if you've been following the RBA's rhetoric on that point closely via its statements on monetary policy and speeches, you'd probably conclude that the bank appears to have remained fairly sanguine throughout the last couple of years.

Rate cut "more likely than not"

Futures markets have taken their own stance on this and now believe that it is more likely than not that interest rates will be cut.

Note the impact of today's Labour Force data on the inversion of the yield curve as compared to, say, 48 hours ago.

The inversion of the implied yield curve was significantly shallower a couple of days ago than it is now, implying that a cut later in the year is considered much more likely.

Summarily, while today's labour force figures actually showed the economy adding a few jobs, futures markets see a higher unemployment rate back at 6.0%, a slowing near-term outlook, and an economy is staring a capex cliff squarely in the face.

Therefore, a rate cut is now deemed to be more likely than not, at close to a 7 in 10 chance (click chart):

The RBA may well wait until it has seen the next round of inflation and capex figures, but it would be a surprise if an easing bias didn't reappear in its statements before too long.
Click to expand...

So presumably all these construction people had jobs prior to the past 5 years - just on more normal wages.

The housing/commercial construction crews got diminished by tradies lured to mining construction. They desperately need these guys to come back.

The end of construction for mining projects is not a bad thing.
T

westminster said:
The end of construction for mining projects is not a bad thing.
Click to expand...

......as long as the housing sector is about to "boom", which by the looks just may be happening.
A

of course rates will fall, don't need to be a rocket scientist there. looks like olympic dam may be back on the agenda so could be good timing to pick up some of the slack in the economy

Interesting to see how some of the trades adjust to normal wages, esp those who started an apprenticeship on 100k+ and thats all they have ever known. The real winners will be those who have saved their money and not blown it all on HSV's and useless junk

Bring it on. Participants in my industry have had a lot less bargaining power while the mining boom's been in full swing.
Not denying all the benegfits it brought and the perfect timing, but looking forward to things evening themselves out again and getting more rich people visiting our beautiful country.

Ausprop said:
of course rates will fall, don't need to be a rocket scientist there. looks like olympic dam may be back on the agenda so could be good timing to pick up some of the slack in the economy
Click to expand...

Badger said:
the dams back on the agenda?????
Click to expand...

just some word within the industry, who knows...

The Fence said:
......as long as the housing sector is about to "boom", which by the looks just may be happening.
Click to expand...

If "boom" is the world you wish to use, yes. No doubt about it. Housing approvals (particularly in Sydney) have been rising rapidly for a few years and most of those project haven't yet started.

Construction finance (which is pivotal in getting the projects off the ground) bodes well.

Speaking of Shadow, I'm sure he called the quick uplift (shown below) to follow the mid-year-dip which was to be expected based on the last few years in Sydney. 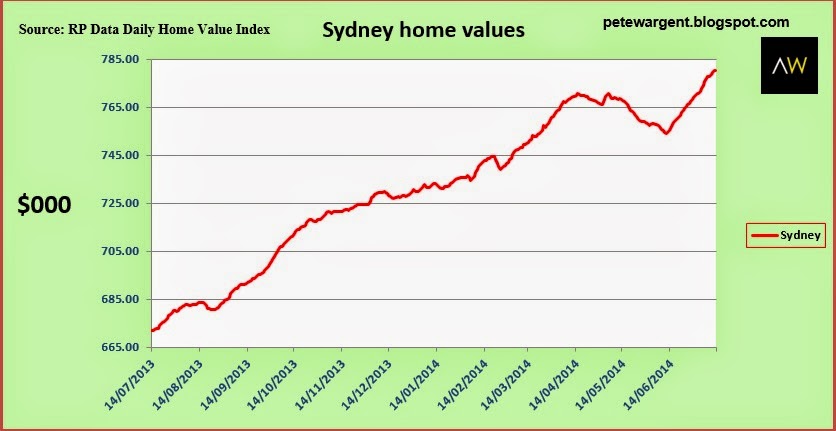 Onwards and upwards.
You must log in or register to reply here.

Is The Sydney Property Market Cooling Down? | Pete Wargent
2