I am not sure whether you have missed this bit of news about Keen starting on his run/walk up Mt Kosciusko.

i hope his voicebox gets frostbite

I like how he says just because he lost the bet doesnt make him wrong...like wtf

Like most highly edumacated individuals - all brain no common sense.

You just never know he will keep looking for instances to prove his theory right..willair..

The journalist from Business Spectator has irked Rory Robertson with a suggestion that the bet has a 5 year limit. Rory has responded that it was a 'peak to trough' bet without limit and Keen is walking/running for his loss.

I liked what Rory said about DGs as 'bubble crew':


More generally, my observation is that those with the strongest views that the price of Australian houses "must" crash because they are "wildly overvalued" typically either don't own one (and so are very keen for prices to fall), don't really know what they are talking about, or both.

In particular, when I hear commentators talking about the dismal Japanese experience as an obvious guide to what will unfold in Australia, I wonder if they actually know what day it is.

The 'bubble crew' seem to keep missing the simple but profound fact that there’s been extraordinarily rapid growth in the number of actual people in Australia with incomes and/or wealth who want to own or rent houses in which to live – as opposed to living in tents and shipping containers – and yet the underlying long-term trend in home-building remains flat near 150,000 per annum. The sheer strength of demand via rapid population growth – alongside very low mortgage rates – has been an obvious upward pressure on home prices.

Moreover, the 'bubble crew' somehow have convinced themselves that the $7000 first-home-buyer “boost” (FHBB) had a much bigger effect on house prices than did the profound 4pp reduction in mortgage rates overseen by the RBA: “This latest house price bubble began when the government doubled and even tripled the First Home Owners Grant”.

Next time you hear that story ask the story-teller what proportion of first-home buyers would have bought, even without the $7,000 gift, once the RBA starting cutting rates aggressively. The correct answer is: most of them. 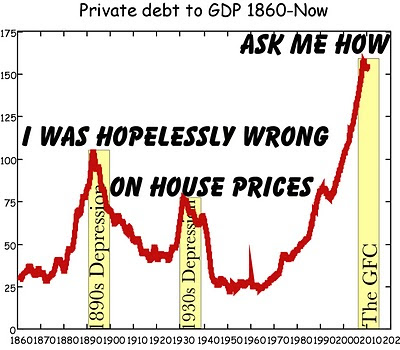 Close up on the t-shirt..or one of the variations from his site
W

An interesting interview with Jeremy Grantham on April 19.

WinstonWolfe said:
An interesting interview with Jeremy Grantham on April 19.
Click to expand...