I haven't been to Australia for a few years so i'm curious if QR codes are widely used? Do people think there's room for both applications or will one dominate eventually.
Here's a QR code for somersoft forums:

They're starting to gain traction. I notice at least one in each Saturday's Edition of my local rag for the last few weeks.

Most still have no clue what they are though. Good thing about QR codes is that it makes it easy to clarify the effectiveness of your print advertising spend.

I should add that i'm about to run about 50 across many print ads in the next few weeks so it'll be interesting to see how they go and what the average cost per scan works out to be.
E

i've seen them around brisbane for a few years now. At bus stop advertisements, magazines, etc. Although I have no idea what they mean, what you are suppose to do with them, how to get the data, etc. Maybe this is one of their major flaws - majority general public do not know what it means or does.

eggnog said:
i've seen them around brisbane for a few years now. At bus stop advertisements, magazines, etc. Although I have no idea what they mean, what you are suppose to do with them, how to get the data, etc. Maybe this is one of their major flaws - majority general public do not know what it means or does.
Click to expand...

It can be used to store a surprisingly large amount of data therefore it is useful for storing contact info, URLs etc. & this is called hardlinking. This is also how advertisers can track the effectiveness of their ads as the ad location can be embedded into the QR (ie. magazine, bus stop billboard etc...) along with other info, like a sales discount code for example.

They were developed for tracking parts in automotive production facilities but have grown to have ever increasing applicability.

I hope this helps to understand what they are.
E

ok, now I know what they are but what do I do with it? To me it just looks like a bunch of dots inside a square.

eggnog said:
ok, now I know what they are but what do I do with it? To me it just looks like a bunch of dots inside a square.
Click to expand...

It is quite easy and convenient. Read this short explanation that covers the most common use (ads for discounts):

It is actually a great idea. But I agree, the implementation has been lacking a little in the general awareness category.
W

I had dinner with a friend last week. She works in a government department and pointed out the liquor licensing notices on the wall. Each has this QR logo. She helped to implement it.

I'd never heard of it, but she says you scan it with your mobile phone and it takes you directly to the website regarding liquor licensing.

I cannot remember whether she said you take a photo of it with your mobile or how you actually tell your mobile to go to that website. I'd had a glass of wine by then, and I'm a cheap drunk

Anything that requires a trip to a howto, to explain what it is, or how to work it, is neither easy or convenient.
the explanation, should be next to the code, and need be no more than, "smartphone Quick Response, link to ..."
C

Thanks charttv, can i ask how youre tracking it..

Wylie, you scan it then it automatically opens a browser and goes to the website.

Eggnog, yes they look ugly but are becoming more artistic.. some with annotation 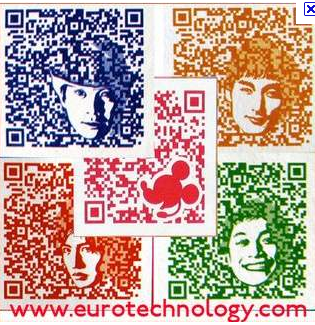 capitalist said:
Thanks charttv, can i ask how youre tracking it.
Click to expand...

manual tagging of URLs for Google Analytics. Top tip@, for faster scans use a URL shortener as the less characters in a URL, the less complex the code and the faster the scanner app will identify and decode the code.
C

Yes good tip, i just experimented with somersoft forums at goo.gl and got this.. doesn't look much different to the eye but probably scans quicker

Lots of threads at the new mobile marketing forum at warrior including this recent one about tracking:
qr-code-tracking-results
E

nope, still don't understand how it works. When people say "scan" what on earth do you mean. You can't "scan" with your mobile phone. I've taken photos of a couple of the QR codes on this thread with my phone but what do I do with them now. How do I tell my browser on the phone to go to the url link associated with the QR code I took a photo of.

there is an app you can download for your smartphone that uses the camera to auto detect the QR code and link to the url. doesnt even need to be a modern smartphone just one that has a camera and lets you dowload stuff. My old telstra nokia e51 has an app called "scancodel" that i got from the Telstra My Place site and it works ok. you dont take a photo. I agree not well publicised so take up seems to be slow.
B

While they are huge in asia, I haven't seem them take off much over here. Additionally, now that smartphones are starting to get NFC and banks are starting to allow payment by it (IE CBA with that NFC iPhone case for paypass payments.) I figure it will be 12-24 months until the new iPhone & Android phones have NFC in it as standard (I expect it in the iPhone 5.) and QR will be wiped out for most uses.. (it may still maintain a niche in mass print media, but I expect billboards, signs etc to move away from it.

There are actually three technologies wrapped up in all this:
QR codes are a cheap, dumb way of swapping URLs for websites or other data. They've become ubiquitous on advertisements over the last year or two, probably off the back of the boom in smartphones.

The main problem that I can see with them is that they require a reader app, and this isn't installed on Android phones by default. And whilst there are plenty of free ones (such as Google Goggles and ZXing), it adds a layer of inconvenience.

It's also possible that they'll be replaced by a newer fad. Augmented reality could be the next big thing.

Where QR codes will win over RFID is cost. It's going to be cheaper to slap a black and white figure on a poster than to embed an RFID chip.

NFC is coming soon as a payments technology. I've just finished a contract at a major phone manufacturer's UK development office, and another team was working on this for a credit card company. I believe it's going to be launched in the UK with the Olympics, and rolled out after that.

I wouldn't be surprised if travel cards (such as Oyster here in London) and debit cards get replaced by waving your phone in a few years. ASSA ABLOY have a lock using it too.

Look on the bright side, that would mean going out you only need to grab your phone, rather than keys, wallet, mobile.

QR's are fine, the biggest oversight is many people don't include a web address anywhere as well. A lot of people have no idea what QR codes are, or others like me who don't have a QR scanning app, and thus can't access the website. Pretty inaccessible
You must log in or register to reply here.